Today is mother’s day in the UK. It can seem a little contrite, but it’s a day worth celebrating for more than just Hallmark – particularly when it comes to wine.

The relationship between mums and their “grown up ribena drink” is a long and tortuous one. There’s reams of advice about how the two can mix, or not. From pregnancy to grandmothering – the way wine habits change shows us a lot about what makes mum happy.

The connection with wine starts early. Issues with morning sickness? In the 19th Century, Champagne was seen as the best remedy – “both internally and externally” – according to Dr Loebenstien-Lobel writing in 1827. The combination of carbon dioxide, acidity and sugar was just the thing for expecting

This kind of mentality stuck around for a lot longer than might be expected. Even in the 1950’s an obstetrics textbook read, “Alcohol, as such, is not injurious and need not be eliminated during pregnancy”. Even today despite the various serious health concerns, up to 90% of soon-to-be-mothers in Ireland admitted to drinking during pregnancy.

We know pregnancy and wine is a dangerous combination. But what about when you’re trying to conceive? 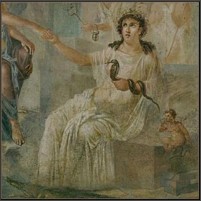 Slip back two millennia and you find wine as an intrinsic links between fertility and motherhood. Particularly during the Roman festival and religious cult of Bona Dea. This entirely female sect was the only real way Roman women could get their hands on ‘religious strength’ wine – as opposed to the dilute and sweetened version which was permitted. Celebrations in her name were seen as a sure fire way of increasing the chances of pregnancy.

Men were barred from festivals in her name, where strong wine would be drunk, blood sacrifices would be made and the next generation of Romans would be insured – one way or another. Wine was seen as a true symbol of liberation, independence and enjoyment for Roman women. It was only during these festivals that the fiercely patriarchal society would allow them to drink it.

And as the kids get older?

I think for many of us we inherit our drinking habits from our parents. I know I certainly did. You can find plenty of wine-mother related literature out there, like the excellent
Knackered Mother’s Wine Club.

The influence of mothers on our wine habits was seen as so persuasive in 16th Century Edinburgh that all women were banned from working with wine. The twin threats of drunkenness and fornication were seen as a direct result of having female taverners.

After centuries of repression, medical toing and froing, changing tastes and habits or complete prohibition – let’s raise a glass to today’s mums everywhere. Make it a good bottle, eh?